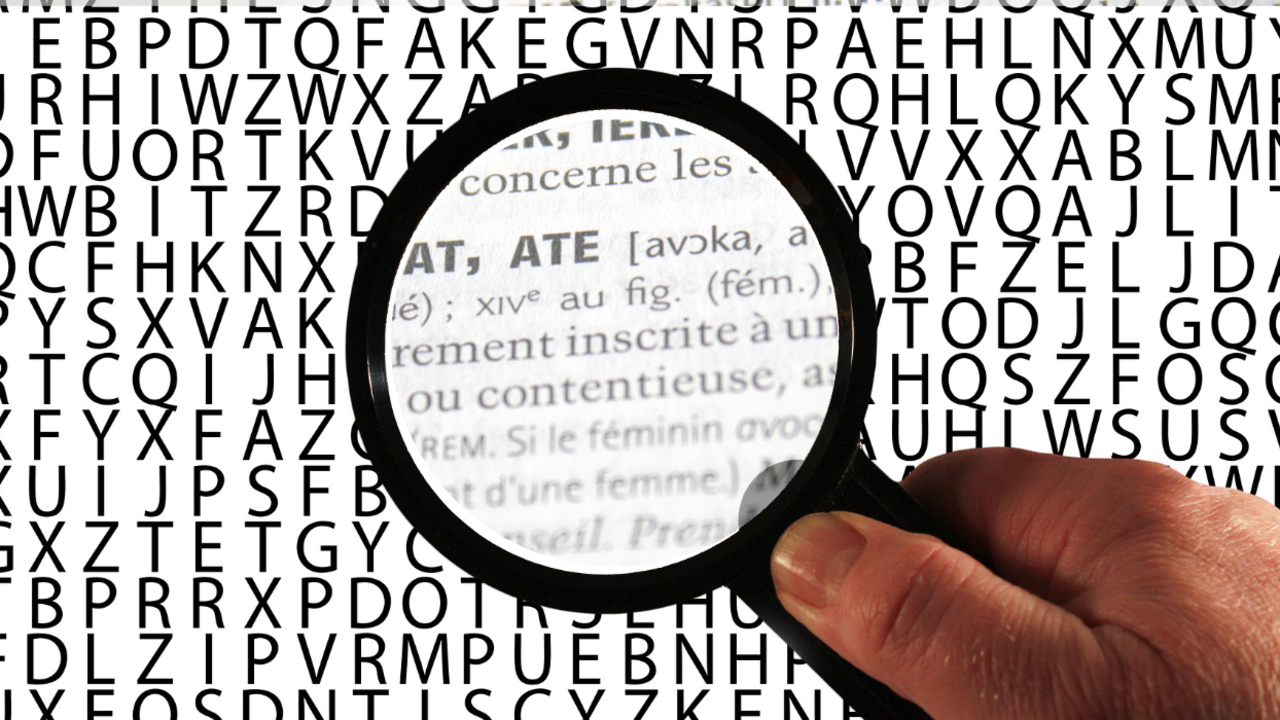 So many terms surrounding autism are confusing to start with. Then different groups try to make the terminology theirs and another definition joins the fray. Because most of the definitions you find are written by people who study autism they are often quite different from a definition of the same thing as seen from the perspective of an autistic person living it. Sort of the difference between knowing the chicken crosses the street and knowing why the chicken crosses the street. To bring the perspective of an adult with Asperger's I created this set of definitions to start with. I have updated this post with more clear definitions and utilize the Neuro Cloud™ terminology of Neurodistinct to indicate  individuals or groups that are clearly distinct from Neurotypicals.

Abbreviation for Autism Spectrum Disorder. In the USA and much of the world mental health conditions are defined and diagnosed with the DSM (Diagnostic and Statistical Manual of Mental Disorders). In the newest version ASD was added and all the conditions under the heading were place in this category regardless whether there were pre-existing more specific definitions of the now outdated, but more accurate conditions.

Autism Spectrum Disorder is now the official diagnosis applied whether the person is incapable of communicating and self-care through to the people such as Temple Grandin, Daryl Hannan, Jerry Seinfeld , Albert Einstein. Because of this condition spanning such a board range of traits in such varying degrees it being called a spectrum condition is extremely misleading. While a spectrum is simple a bad to good linear scale, this is not an adequate or useful conceptual visualization of ASD. This is due to the multitude of potential traits and the advantage or disadvantage of that trait at that magnitude. The multivariate complexity of ASD is important to understand in order to properly think about autistic people.

A form of autism defined by Dr Hans Asperger from his studies in children where he referred them as his “little professors”. People with Asperger’s tend to be average to above average intelligence and are frequently are able to operate in the neurotypical world without being noticed until some obvious autistic symptom such as a meltdown occurs.

Many high achieving people in science, math, electronics, computers, business, acting, music, arts are either believed to have or have been diagnosed with Asperger’s. Most likely if you work in a mid-sized or bigger company, you deal with aspies regularly and it likely does not go well.

A term used by many adults on the autism spectrum with the “desirable” symptoms that are best explained with the unfortunately replaced Asperger’s Syndrome diagnosis.

Cognitive conditions such as Autism when looked at in a detached aspie way make no sense when phrased in “people first” language. Consider with most disabilities there is no change in the way a person perceives and processes input so there is no cognitive change in who the person is or how they sense reality. By its very nature autism and other cognitive challenges cause the world to be perceived and processed in a very different way than the norm. In the case of these type of conditions, the alternate perception and processing methods do cause a marked impact on the person. To me this is best described as an autistic person due to all input coming through the filter of the autistic mind.

My experience is most adults with ASD recognize the tie between their condition and who they are and choose to be known as an autistic person. This is the category I am in. Conversely, I commonly see people who work with juvenile autism and parents wanting their child referred to as a child with autism and do not want to accept that autism is an innate part of the individual.

A medical term which basically means additional conditions that are frequently present with a primary diagnosis such as ASD. In regard to ASD some of the most common are anxiety, depression, sensory processing disorder, bipolar, epilepsy. OCD, etc.

While it may look like a tantrum, it is not. A meltdown is much closer to a seizure in the context that it is an actual happening in the persons brain and once it starts it mostly needs to run its course. What differs between a meltdown and tantrum is the cause and any desired outcome.

A tantrum is a cognitively chosen action expected to accomplish a predetermined outcome. In contrast, a meltdown is an uncontrolled loss of cognitive processing particularly in regard to executive control and emotional regulation caused by either a sudden or gradual accumulation of anxiety, stress, frustration, disappointment, being mis-understood, and other emotions that accumulate instead of being processed and moving on.

A concept of Neurodiverse Communication Consultant Tim Goldstein created to better explain the concept of neurodiversity. The Neuro Cloud™ groups all humans into the same tumbling cloud of all the various ways humans can perceive and process the world. It then illustrated how traits can run across the entire gamut of the human population and are not just related to a specific condition but distributed human wide with some having more and others less of each trait. In the Neuro Cloud™ concept it is not the presence of a trait, but the magnitude of that trait that matters.

Has 2 meanings. First and most important, it is the concept of human brains having a large range of what is normal structure, growth, and development just as any other part of our body. These brain variations are thought to cause humans to perceive and process the world in an equally wide range.

Neurodiversity further says the wide range of traits, perception, and processing is not limited to categorically defined groups, but are distributed in varying amounts across the entire range of humans. This means you can have both neurotypical and neurodiverse traits in an individual.

The second usage is with the Neurodiversity movement who want to make this a recognized group like LGBT. This group gets all twisted up over using the right term nerodivergent, neurodiverse, etc and detract from the first and more scientific meaning while confusing people at the same time.

The concept that a selected group of individuals has members representing a wide range of perception, processing, and thinking styles. Usage would be, XYZ company is quite neurodiverse. Very similar to how diverse is used in the D&I realm.

For the activist who is too wrapped up in social pecking order, this is the term to be applied to a single individual. i.e. I am neurodivergent. Particularly in the USA, this term is not used due to being confusing and negative sounding.

Neurotypical is the word used when speaking in neurodiverse terms about the vast majority of humans that fall within what society deems as “Normal”. Nothing special about them, but because they are the majority of the world most thought and convention is based on neurotypical perception and processing so includes varying, but significant amounts of emotional state and concern for the perception of others.

Part of the Neuro Cloud™ concept. Simply an individual or group who do not fall into the neurotypical category. Think Neurotypical = like the majority overall, neurodistinct = different from neurotypical in some distinct way. There is not a clear boundary between the two groups with many individuals presenting different traits at levels associated to different groups.

Any group within the Neuro Cloud™ (all humans) which displays a distinct set traits and intensity. Neuro Minorities are found in the neurotypical, neurodistinct, and the indistinct area between the two.

Sensory processing disordered is where one or more senses are either over whelmed or under stimulated. Too much sensory may cause one person to overload, shut down, and need to get out of the situation. Too little input may lead to seeking stimulation such as stimming, rocking, bouncing, self-mutilation, and other ways to get enough signal so it is sensed.

Frequently the autistic have difficulty processing rapidly changing input and requests. The input is being processed, but not as fast as it is arriving. As this backlog builds so does anxiety which can quickly lead to over whelm. Shutdown occurs when the over whelm becomes so great processing stops and the persons brain is effectively shut down from overload.

While we all tend to have items that interest us more than others, autistic people frequently have a special interest that may border on or become an obsession. While there are no limits to the subject of the special interest, it is not uncommon to see intense focus on science fiction or super hero subjects, numbers, insects, dinosaurs, and other seemingly odd subjects.

Special interests, particularly in youth can be seen as non-productive and of little use. But to the autistic person the special interest is a central core of who they are and worthy of intense interest. It is quite common for autistic adults to turn the special interest that had been a source of ridicule into a very lucrative career due to their intensive knowledge of the subject.

A classification that suggest an item can be represented as positions along a line between two extreme or opposite points. When applied to autism the word spectrum only increases the lay persons’ confusion regarding the true nature of being autistic. My research suggests there are about 30 individual items that each express a spectrum and must be considered when looking at ASD. When the 30 items are averaged into a single point on the misleading autism low to high spectrum all meaning is lost as the specific details matter and when considered individually would yield a very different conclusion.

A term that encompasses a wide range of method to provide self-stimulation which in autism is believed to provide a calming effect. While the exact cause is unknown, there is belief it may be related to sensory processing disorder. Examples of this action include rocking, spinning, hand flapping, twirling hair, nail biting, etc. While these actions are common among people, the frequency and intensity are what sets autistic stimming apart from what would be considered a normal human habit.

The Super Powers Myth of Autism and Other Neurodistinct Conditions Jan 30, 2023
nonPareil, Autistic Employment Through Workplace & Skill Training
autism at work
Jan 26, 2023
Advice to a Manager with an Autistic Worker, a Behavior Issue, and Intolerant Staff
workplace
Oct 08, 2022
Close