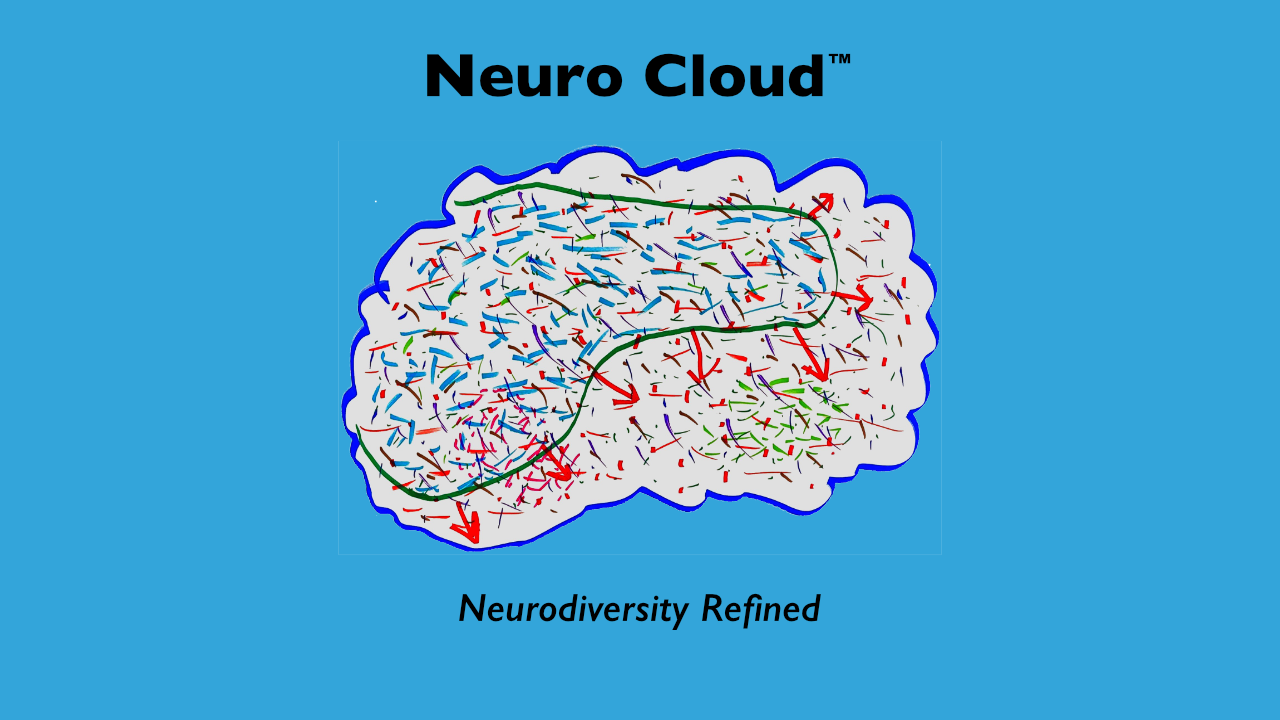 Australian social scientist Judy Singer coined the word "neurodiversity" in her theses paper. It was a great advance in viewing the relationship of an individual with certain traits or group of traits to the to the larger group, the maker of societal norms. Her concept uses terminology which, while appropriate in the academic setting of her work, is hard to approach for the average person, confusing in how the items fits in the whole, does not align with how we speak of other human capability challenges, and uses a word that make groups of people sound bad. Judy's concept has created a movement of seeing people with distinctly different perceiving, processing, and thinking patterns as normal human variation, not as broken human needing to be fixed to be "normal".

In science, concept mature and develop as others add to the idea. This has happened with neurodiversity as it has moved from academic discussion to real life identities. As with much science, the academic body of knowledge tends to be unapproachable for the lay person. With academic concepts, no matter how elegant, there needs to be a "productizing" of the concept to make it relatable and easy to understand from a high level. The Neuro Cloud™ is my model to put Judy's great work into a mass market package. Every bit of it has been considered from the point of "can an average person get the drift".

Many autistic people are already screaming "If they are too stupid to get it, that’s their problem." While there are many legitimate reasons involving autism which can lead to this incorrect conclusion, I once firmly held it. I finally recognized I could be "right" or I could apply the lessons of an entire industry devoted to getting people to think different, marketing. I finally recognized explaining something in a way the receiver can understand is not "dumbing it down", but actually "smartening it up" so more people could benefit, not just the gifted few.

I set out with a few specific goals. It had to be simple enough it could be taught to a 6th grader. It had to align with the way we speak about all other types of diversity. It had to resolve that non-neurotypical is often called neurodiverse or neurodivergent. Finally, it has to have an appealing term for non-neurotypical that almost makes everyone want to be one. 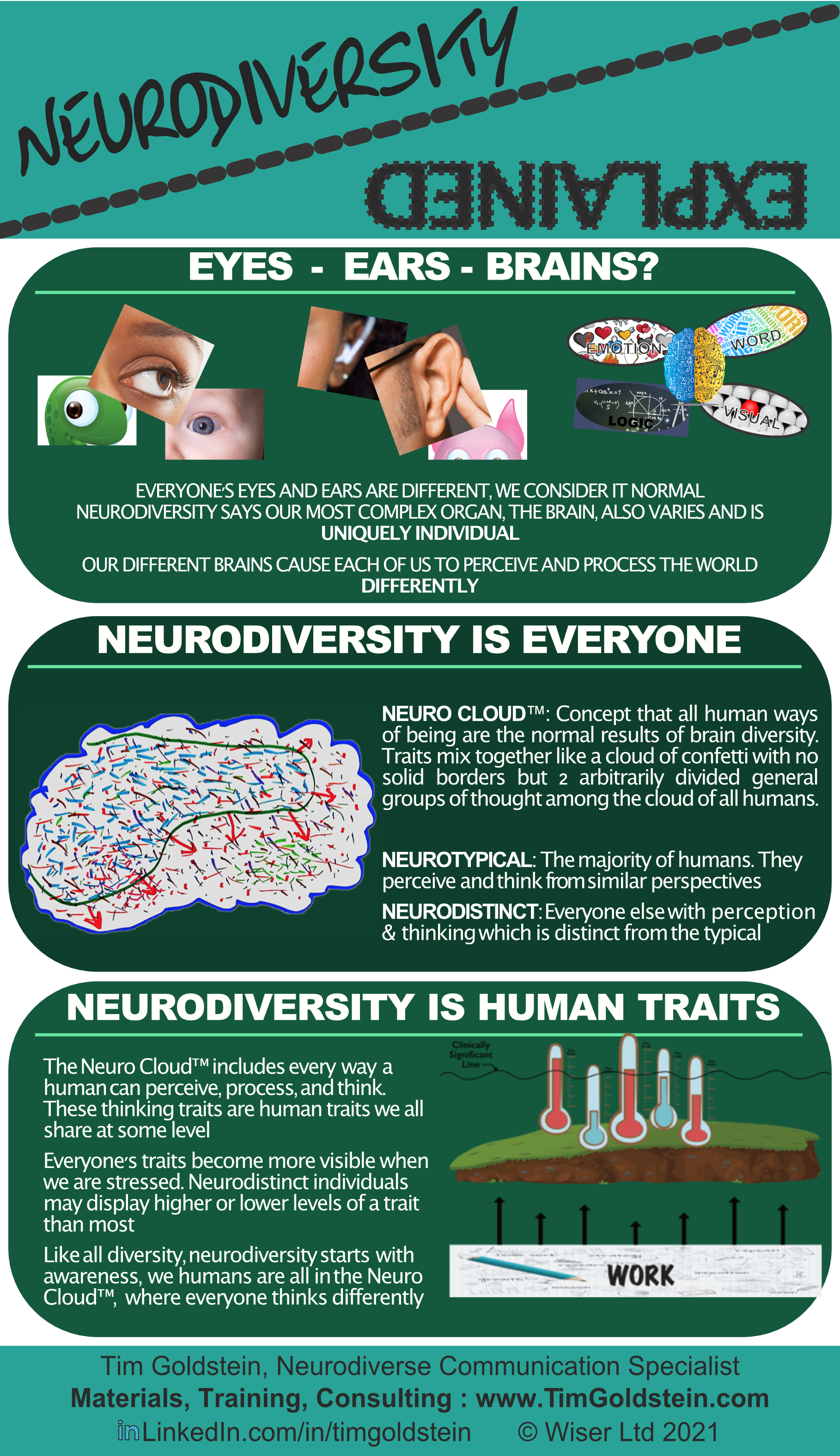 Let's examine how well I met the goals of this refinement. I believe the infographic is easily understood allowing most to get the key point of, different but normal in the range of neurodiversity for humans.

The other goals fall under two broad categories, aligning neurodiversity and diversity and a word for non-neurotypical which give a sense of desirability and pride. I'll start with aligning with diversity. Starting at the top and we have the concept of diversity meaning, the range of all humans generally around visible or other characteristics, being normal and equal. Neurodiversity is this same concept of all humans only applied to cognition. Next is the term diverse. This is a term used to describe the makeup of a group in relationship to normal distribution. We speak of it as if a measure of a group’s diversity. XYZ company has a very diverse staff. Neurodiverse is the same, a term to talk about the relative measure of the diversity of a group in regard to their perceiving, processing, and thinking styles. Everything else is just the names we are using for the groups.

In the world of neurodiversity there are two primary groups, neurotypical which seems to be relatively universally understood and accepted and non-neurotypical where we have confusion. With Neurodiversity being all humans and neurodiverse now being the "how much" descriptor that brings the term neurodivergent. Looking at this word from the, how things influence people marketing perspective neurodivergent is a loser. Just like many science terms, they need popular translations for the public to get it. Instead of the negative, separating, divisive term, I coined Neurodistinct.

Neurodistict wins on many fronts. It is easy to spell and say. It embodies something people want to be, distinct. Finally, it eliminates the artificial DSM imposed hard line with a definition of "thinks in a manner which is distinctly different than the majority."

I hope this give you both understanding in why I refined neurodiversity and motivation to adopt the new "we are the cool group" term, Neurodistinct. Below is a simple chart to help clarify how to speak about neurodiversity in a way that makes logical and linguistic sense by aligning it with the concepts of diversity.

Nov 2020 Update : A little while after writing this post I hear a new to me relabeling of the two major groups in the Neuro Cloud™. The terms are neuromajority, neurominority. I gave them a try and discovered I have some issues. First, the neurotypical designation of one groups is well known and broadly accepted. I struggle to understand the value in replacing the term neurotypical. The other main challenge is the word minority. I believe it is associated with societal issues which need to be addressed fairly to all but I see no advantage in using terms associated with these issues and further confusing what ASD is.

Another term I have recently run into which I cannot support on a number of levels is "allistic". This is supposed to mean non-autistic. My three major issues with it are: 1) Virtually no one knows what it means while almost everyone understands non-autistic, 2) It is often used in a way to mock anyone who is non-autistic and on a number of sites portrays the non-autistic in a mocking manner as a medical condition, 3) As confirmed by Dr Lawrence Fung of Stanford Medical we don't have "non" terms for medical conditions and this would set a precedent that medical terms should have have a special word for people who don't have a specific condition. Instead we say "non" and the condition and it is universally understood.

The Super Powers Myth of Autism and Other Neurodistinct Conditions Jan 30, 2023
nonPareil, Autistic Employment Through Workplace & Skill Training
autism at work
Jan 26, 2023
Advice to a Manager with an Autistic Worker, a Behavior Issue, and Intolerant Staff
workplace
Oct 08, 2022
Close